GreenVulcano 4, the latest evolution of our enterprise service bus designed to go beyond the traditional approach on SOA architecture by innovatively interpreting the (EAI ) enterprise application integration to meet today's requirements for high flexibility but with the robustness and reliability of the systems traditional.

Intrinsically, the enterprise service bus is a mechanism in which a bidirectional interface from connected systems is always provided. This means that all source and destination systems must be connected to the ESB and that the applications themselves communicate by sending messages on the bus.

An enterprise service bus is, therefore, a bus on which messages between integrated entities travel.

However, one should not think of the BUS as a mere intermediary structure, since it is possible to modify the messages by intervening in the logic of the software.

ESB GreenVulcano: a use case

To better understand the strength of an ESB, let's analyze its implementation.

Suppose we have a business model according to which, a series of stores that operate on behalf of the shop, are periodically supplied from a single warehouse, all respecting the following logic:

As you can see there are several systems and components that cooperate with each other in a reality that we can define as integration platform: the ERP system, the web services displayed by the bank, the application that updates the ERP system for each sale of a garment, the insertion of data that takes place through the NFC reading of the various items, can in fact use protocols and different programming languages.

The enterprise service bus connects the various applications with which it interfaces.

If every service were to have a communication interface for every other service, how many interfaces should we create?

Here, therefore, that each system should have a single interface to the ESB, as can be seen in the figure below.

Scalability of an ESB

Imagine the example illustrated above, in a context without ESB: if each component must be able to interact with all the other components, no more than 16 interfaces would be needed, but 56! 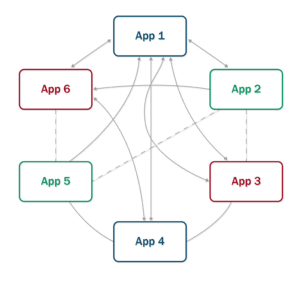 Any change to a component could result in the modification of all the interfaces of those components with which it interacts: you can imagine the time that each update needs.

The use of an ESB is therefore the winning choice, as we can well understand how such an architecture can be scaled in terms of components, allowing a very large number.

The SOA (service-oriented architecture) used by Greenvulcano, as the acronym suggests itself, is a service-based architecture: in fact, we have the requests for services, and on another level, we have the actual services called up and connected by means of a BUS. The OSGI specifications implemented in Greenvulcano therefore allow the development of a component platform. These components or applications, available as bundles for distribution, can be installed, started, stopped, updated and uninstalled remotely without requiring the restart of the ESB that is deployed on the Karaf container.

The services or components within Greenvulcano, can be either strongly decoupled, think about the case in which a feature can be associated with a single service, or we can have a workflow of services (that is, multiple services performed sequentially). The enterprise service bus integrates and orchestrates all this.

The main features of Greenvulcano will be described below

SUGGESTED ARTICLES
What’s business automation and why you should automate your business.
No Comments

In a time where innovations permeate the market at great speed, increasingly revealing the difficulty of the human brain to keep up with the inflow of generated data, is still possible to ignore the need to automate some work activities? Can you be competitive in your market without exploiting the power of automation? A FEW DATA POINTS In […]

Approfondisci
41% OF ROAD ACCIDENTS DUE TO DISTRACTED DRIVING: TRENDS, COVID EFFECT AND FUTURE OUTLOOK
No Comments

Approfondisci
Research & Development during Covid19: beyond the lockdown. Interview with Mario Stefanutti
No Comments

The R&D Lab in GreenVulcano is one of the most active “Made in Italy” technology research environments around. For more than 20 years, the research group has been extremely active in both the IT and tech innovation spaces. All this with a keen eye focused on the world of IoT and software integration. Today, we […]

Boston 124 Reservoir St., Needham Heights MA, 02494
info@greenvulcano.com
© GreenVulcano Technologies 2023
X
WORK WITH US
Fill out the form and apply for our job offers